My next painting challenge goal is set for mid-July when I intend to run some games at Historicon.  I have ideas for 6 different games, but I need to trim that down a bit and decide which 2 or 3 I will commit to so I can submit to the HMGS by the end of May.  This means I also need to decide which sets of figures deserve the lion’s share of my painting attention.  And speaking of the “lion’s share” I am pleased with these particular figures I received yesterday:

No, these didn’t arrive painted–I borrowed a studio shot on the distributor’s website.

Yes, cat-people wearing turbans and wielding scimitars!  Their game “element” is water, so I intend to put a bit of light blue on each figure, but I’m going to have fun with the fur patterns and stripes on those baggy trousers.  The game describes these as what one might expect a fantasy race of cat-people to be–fast, agile, quick, and deadly within claw & fang range in close combat.  The larger variety are equivalent to tigers and possess great strength and serve as bodyguards for the spellcasters and leaders while the smaller, light infantry are equivalent to panthers and leopards.  And the spellcasters?  They’re actually blind but are guided by their superb powers of divination.  And that reminds me of a book I read last year about a blind cat named Ulysses–the author explained that his eyes were removed as a kitten because of a severe infection, but the cat still navigated around her apartment as agile as any of her other cats, jumping up on the furniture, etc.

And, speaking of cats, I expected Sabine to prefer the Khaliman cat-people, but she seemed to be more interested in the booster box of Aurloks I also included in the order. 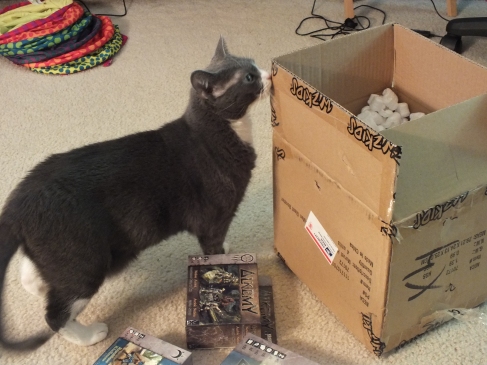 Or maybe she’s really most interested in the shipping container which arrived from a distant land and was permeated with smells from the long journey and has that perfect corner with just the right mixture of firm and pliant for claw scratching.  She certainly likes those cardboard boxes.

Meanwhile, the other cat, Mira, just ran off with one of the packing peanuts to play with as if it was the most exciting cat toy ever invented.  I don’t know why I bother buying cat toys anymore.

Another project is going to be a proxy demon force for the Hell Dorado game with a nautical theme.  I haven’t started painting any of these, but I’ve started collecting the figures, including a hammerhead shark with legs and arms, a couple of pirates, and the chief demon, a ship’s figurehead come to life: 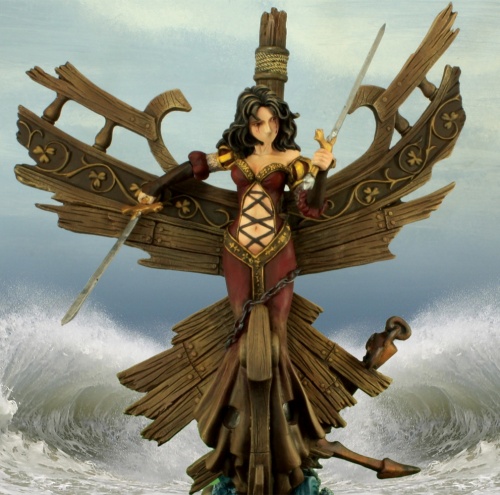 By the way, I borrowed the title “Weekend Cat Blogging” from another blog and website I admire which offers a range of easy wargaming scenarios and free paper figure templates.  Check it out:  http://www.juniorgeneral.org/

Received an order today of discounted miniatures by post.  The cats helped me open the box and Sabine was particularly interested in the contents.  Since I was home from work early and it was a warm, sunny day out I went ahead and primed some figures and got started block painting.

The Aurloks (above) are associated with the element of Earth, so I’m starting with brown and tan colors.  But I want to have some fun with the feathers and may use some red & purple (it’s a fantasy setting, so why not birds with red & purple feathers).  The other box of figures are catlike humanoids associated with the element of Water (the game is called ALKEMY, after all, so each of the 4 factions represent one of the four classical alchemical elements), so I want to feature just a bit of blue although I plan to have fun painting them along the lines of cats like leopards, panthers, and tigers with lots of orange and yellow…. 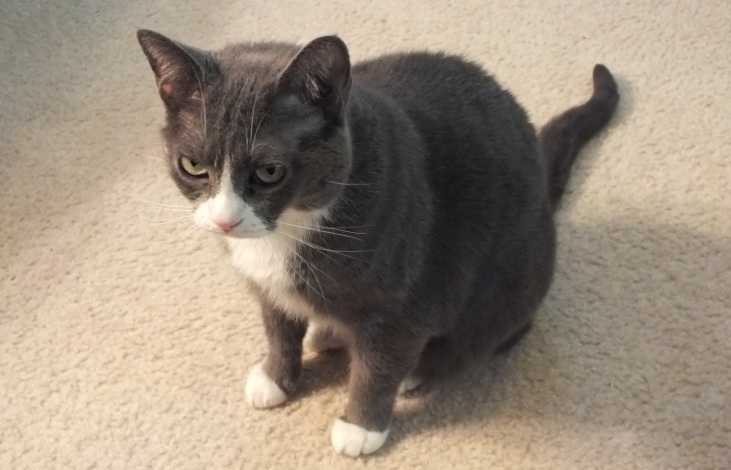 Meanwhile, Sabine watched as I painted.